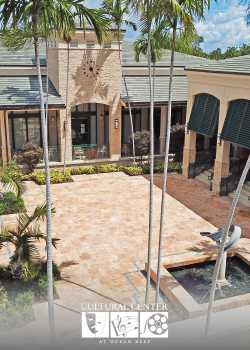 “Stepping Up & Moving Up” at the Cultural Center

Between the Medical Center and Public Safety facility on Anchor Drive stands a community asset that is vital and essential to the quality of life at Ocean Reef.  The heart of the community, the Cultural Center is the busiest building on The Reef. On any given day it hosts meetings, lectures, first-run movies, receptions, dinners, world-class live entertainment and more. Its intimate 300 seat theater, library, museum, and versatile, gracious meeting and event spaces are all just a golf cart ride away.

“Stepping Up & Moving Up” is not the name of an exciting new show coming to the Cultural Center Theater; it is the crucial action that scores of local families are taking to support the Center’s Endowment Campaign that will endow their options and insure top quality entertainment for the Ocean Reef Community.

The variety of offerings for such a small, remote community is indeed impressive, as are the big names (dozens each season) that the Center has drawn to The Reef, including Johnny Mathis, Vince Gil, Willie Nelson, Lilly Tomlin, Dennis Miller, Paul Anka, The Oak Ridge Boys, Jeb Bush, Mikhail Gorbachev, Liza Minnelli, Kenny Rogers, Anne Murray, Newt Gingrich and Tony Bennett, to name just a few.

“It’s absolutely terrific, but it comes at a cost,” Alan Goldstein remarks. “In spite of its undeniable popularity, we have had to continually fundraise each year to keep the programs, activities and facilities at the quality level Ocean Reef members expect.”

Dick Farmer, explains “Most people don’t realize it, but this entire facility was built, paid for and is operated by contributions from your fellow Ocean Reef members and neighbors. Ticket sales don’t even come close to covering the cost of our shows and functions. So we have to ask members to come forward to become ‘Producers.’ Groups of 8 to 10 people form to sponsor a show and usually cover most of the cost of each show.”

In its first 10 years, about 500 generous donor families have funded the 501(c)(3) non-profit organization, but nearly every one of the 1,800 member families in the community has benefited from the essential Center now at its core.

With that in mind, the Center’s Board decided to pursue an endowment with a goal of raising $15 million to end the need to continually fundraise. An Endowment Committee -- comprised of Board members Alan Goldstein, Dick Farmer, Nancy Harrington and Barbara Olcott -- was formed and has raised over $10 million in pledges toward that goal in the silent phase of the campaign.

The public phase began at the start of 2010, when letters and brochures went out to the community asking new donors to “step up” and past donors to “move up” to the next level of giving, for instance for Founders to become Directors, and Directors to become Benefactors, and so on.

It is simple and convenient to “step up” or “move up” and tax deductible donations can be made over a five year period.  The Center still needs and encourages sponsorship of shows and will continue to welcome those who wish to be Producers.  Those who have ‘moved up’ will no longer be solicited, but their participation is always welcome. Contact Administrator Lisa Dykes at 305-367-7339 or ldykes@oceanreef.com for details.